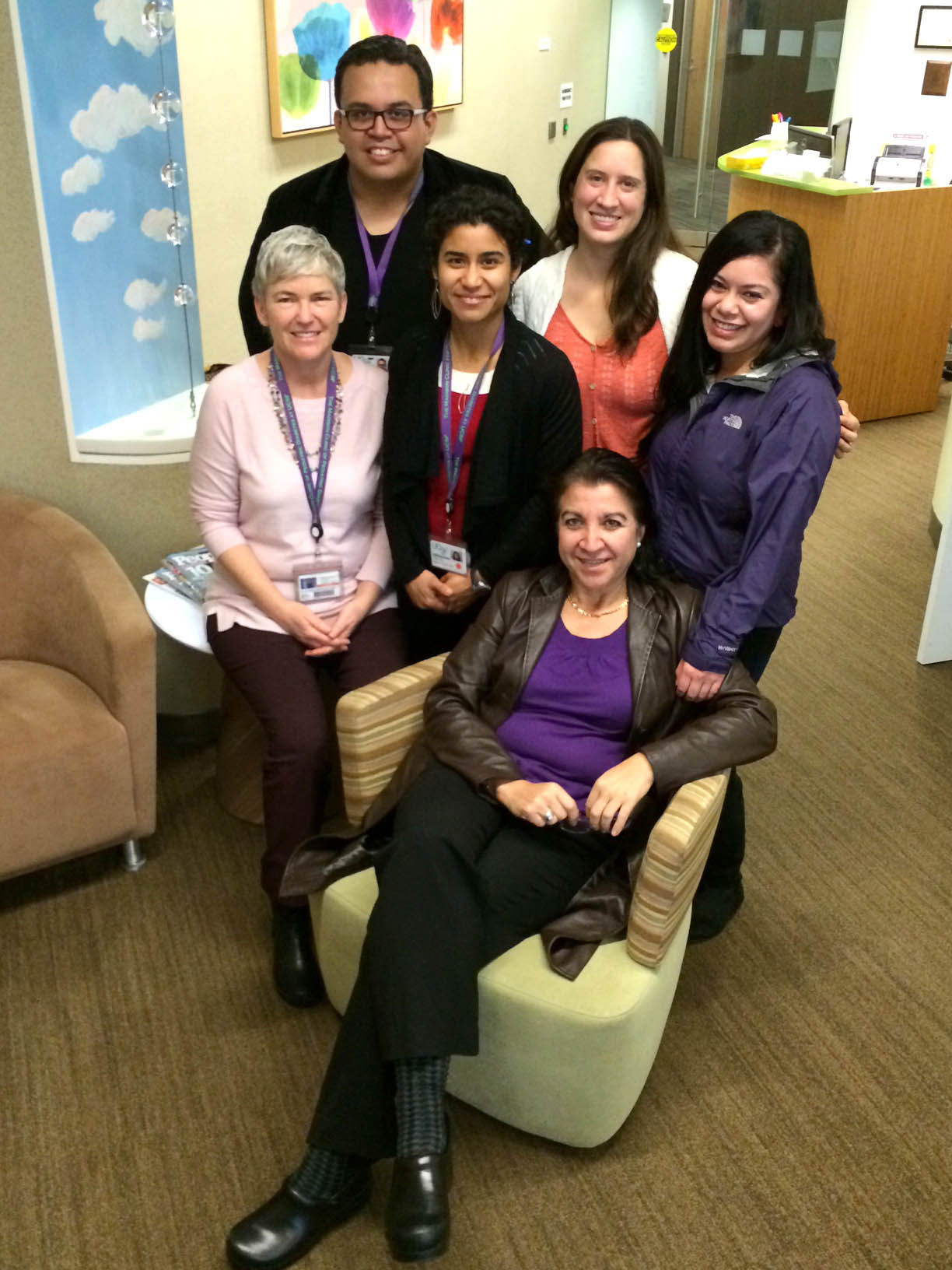 What is a SMA? Think of a shared medical appointment as a team visit where a small group of families come in at the same time to see a few providers. The families share challenges and successes and drive the content of educational components covered, while the providers spend time both with the group and individual families.

A total of three Spanish-speaking families with a young adult with diabetes attended the SMA.  All three families came with both parents, one family brought a teenage sibling, and one young adult was accompanied by his girlfriend.  There was one female and two male young adults who participated in this pilot and were between 17-18 years old.  Two of the young adults were enrolled in their first year of college, while the third is a senior in high school.  The motivated healthcare team and the breakdown of the SMA consisted of:

The first half of the visit was led by Marcela Arregui-Reyes and was spent discussing adolescent and young adult development and its impact on diabetes, with parents sharing some of the challenges they were facing.  In the second-half of the visit parents and young adults were split up.  Parents met with Dr. Diana Naranjo to discuss the emotional side of diabetes, while the youth met with Marcela Arregui-Reyes to talk about dealing with diabetes-care related conflicts with parents, the effects of alcohol and other substances on diabetes- in addition to topics on sex and body image.  During this visit the young adults met one-on-one with Maureen McGrath to discuss meter and pump downloads and make appropriate changes to their diabetes care plan.  Lunch was provided midway through the visit and served as an opportunity for families to mingle and get to know each other better via a “convivio” or gathering amongst members of the clinic community.

Eligibility for this first SMA included the following criteria:

1. Age between 15-18 years old
2. Parents are primarily Spanish speaking
3. Have completed the Transition Readiness Assessment in Diabetes (TRAID) for either someone with type 1 or type 2 diabetes.

Preliminary results from the qualitative survey showed that all participants rated the SMA experience as “excellent”. Among parents, 75 percent indicated that they would prefer a SMA format for their upcoming visits, and 25 percent indicated they would prefer a combination of alternating between SMAs and traditional one-on-one appointments.  In contrast all of the youths indicated a preference for a combination of SMA with traditional appointments.  All participants thought that the SMA was useful, agreed that other group members experienced the same issues with diabetes as they did, and felt they had learned something useful about diabetes management from other participants.  Furthermore, the majority of participants reported sharing about a current issue with diabetes they are facing with the group, asking about a topic on which they wanted more information, and learning something new about their diabetes.

We are looking to continue this program and replicate it for our English-speaking families.

This program was inspired by the Diabetes Minor with Nursing Faculty member Maureen McGrath. It was a joint project with Nurse Practitioner candidates and Madison Clinic Peggy Huang Diabetes Nurse Fellows Celina Trujillo, Adrian Espinosa, and Alex Freeman who are from the UCSF School of Nursing class of 2015 . This was part of their curriculum, "Project Planning Course: Student-Health System Sponsor Introduction". The course involved working on an evidence-based project, along with another student and “Student Partners” (staff from the Madison Clinic and in this case, Marcela Arregui Reyes and Theresa Garnero).