Home » About Us » Meet Our Team » Allied Health Partners

I was born and raised myself in Wisconsin where I earned my BSN degree from the University of WI-Oshkosh in 1983.  During my senior year of nursing school I took my first plane ride and spent 10 weeks at Bearskin Meadows Diabetes Camp.  I fell in love with California and the warm sunshine so I went back to Wisconsin, completed my final semester and a month later I boarded a Greyhound bus to San Francisco with one suitcase and a typewriter.  I was hired at Alta Bates in Berkeley and then not allowed to start work because a blood glucose during a pre-employment physical was over 200 and therefore they felt “it would be a risk to have me as an employee”.   A couple of jobs later I ended up at UCSF in 1985.  I’ve had a few different positions within UCSF and even left to work in industry with one of the insulin pump companies and then in the Kaiser adult diabetes program for a couple of years.  I returned to UC in 2003 and have been working with the pediatric diabetes group since then.

Over the years, through my own personal experience with type 1 diabetes and the experiences of both adult and pediatric families that I’ve worked with, I’ve developed a strong appreciation for what it takes to deal with the challenges of life as well as diabetes. 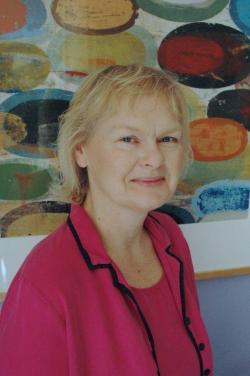